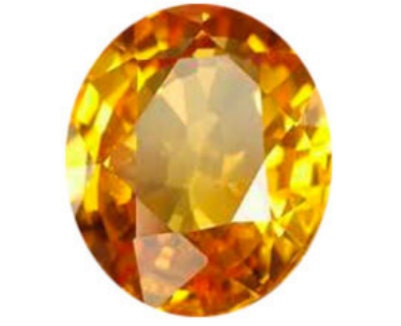 Gemstone of the Month

The month of November is most often associated in the United States with Thanksgiving and football. If one is lucky enough to live somewhere that deciduous trees grow; this is the time to bask in the beautiful palette of red, orange, and yellow hues of the falling leaves. So, it comes as no surprise that the gemstone for this month is yellow! This month we have Yellow Topaz. 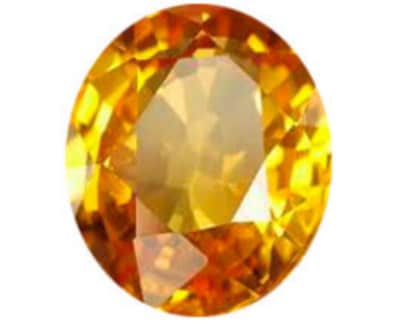 Yellow Topaz is the most officially recognized birthstone for those born in this month(1). Topaz is an aluminum fluosilicate; transparent silica mineral with aluminum and fluorine inclusions, with a Mohs hardness scale value of 8 (that is pretty hard; up there with sapphires and diamonds), yet it is has poor toughness that lends it to cracking and chipping easily (2). It has a density of 3.5 to 3.63, which varies due to the compactness of the matter; most useful in identifying two similar looking specimens apart (4). Topaz is normally colorless in the absence of impurities, natural iron impurities are what dictate the wide array of colors of topaz exist and how yellow, orange, and sometimes brown they are (5). Very rarely are there red, pink, and purple varieties that do exist in nature, however blue and mystic topaz are products of irradiation done in labs (6). The Geology Page states that the most expensive and sought-after color of topaz is the variety called “Imperial Topaz”. Imperial Topaz earned its moniker from its relationship to royalty. The Gemological Institute of America (GIA) posits; Russian royal family’s insistence on keeping the finest colors of this gem, which was mined in Russia’s Ural Mountains, exclusively for their use. An alternate explanation, especially popular in Brazil, is that it dates from an 1881 visit by Brazilian Emperor Pedro II to Ouro Preto—the town closest to Brazil’s most productive topaz mines–and the gift of a reddish topaz to him.

Due to its royal roots the Imperial version has the highest value. Speaking of the roots of topaz, the name topaz has two theories of origin. One theory is that “topaz” comes from the Sanskrit word for fire, tapas, while another theory is that it comes from the Greek word topazos (7). One of the most fascinating theory of how topaz got its name comes from a tale about Pliny the Elder who found a “yellow-green crystal” on an island in the Red Sea; peridot also was found there (8). However the name came about when someone says the word “topaz”, most people immediately think of the yellow variety, although the popularity of mystic and blue topaz is rising.

Topaz is can be found in a variety of places throughout the world. The most synonymous place with topaz is Brazil. Brazil has one of the world’s most famous mine Minas Gerais, said to be the origin of the world’s finest quality topaz for over two centuries (9). According to the GIA, other notable places include Pakistan; that has the mine Ghundao Hill which is the source of the finest pink topaz, Namibia, Nigeria, Madagascar, Mexico, Myanmar, Sri Lanka, the United States, and Russia. Metaphysical Properties and Lore Metaphysical properties were not ascribed to the gemstone until the Twelfth Century, when a German nun and mystic Saint Hildegard of Bingen wrote of its healing powers when soaked in wine (10). Additionally, with the yellow version of topaz it is believed to relieve tiredness by its warmth emitting color of the sun’s rays (11). Topaz has a wide range of healing and metaphysical uses from feng shui to physical ailments *(not to be replaced by actual medical physicians).

Topaz is a wonderful stone to use for healing a variety of maladies. It has been said to help with everything from nose bleeds to depression (12). Yellow Topaz specifically, because of it’s golden hue, is associated with the solar plexus chakra, therefore it is no surprise that it helps with issues of that are of the body such as depression, placing it on one’s solar plexus is said to bring “an intense feeling of well-being” and is great for patients after operations as it helps with circulation and is effective on heart pains (13). However, ailments of the solar plexus are not the only ones this wonder gem helps. It has also been noted to relieve skin eruptions, “mumps, scarlet fever, measles [...] reduced snoring” (14). According to The Encyclopedia of Crystals, Herbs, and New Age Elements, yellow topaz “aids digestion, stimulates the metabolism, and combats eating disorders such as anorexia and bulimia”. That is supported by the claims in The Metaphysical Book of Crystals and Gems that it is called the “gourmets stone” as it stimulates taste, wine stewards often use it and it said that by sucking on a topaz before a meal aids in appreciation of the food and digestion. Magical Uses

Yellow Topaz is a stone of positive affirmation, visualizing one’s goals, and helping in manifesting those goals (15). Use topaz as an amulet for steadying moodiness and alleviating depression, and The Encyclopedia of Crystals, Herbs, and New Age Elements quotes to “use topaz to make requests of the universe that you hope will manifest on the Earth plane”. Feng Shui

Due to the vibrancy and brightness of yellow topaz (remember it was referred to as emitting the warm rays of the sun) it is a bring of joy and love to a room (16). The best place to harness the most power out of this stone is in the center of a room or if there is a designated “well-being center” of the house.

As stated before, yellow topaz is an empathetic stone. It has a mellow energy that when especially placed on the throat chakra aides in telling the truth and when placed over the third eye chakra the topaz aides in forgiveness (17). Yellow Topaz holds great power to help with communication. Zodiac Correspondences Given that it is November’s birthstone, which is usually represented as Scorpio, one would obviously think that yellow topaz is related and works with the corresponding astrological sign. However, it resonates with more than just Scorpio. For Scorpios, it helps with communication and balancing their tendency to overdo it, it is also seen as a favorite stone of the Gemini, and for Libras it also aides in balancing their energy (18).

Topaz comes in a variety of colors and from a variety of places on the planet. However, there is something a little extra special about the yellow variety also known as “Imperial Topaz” due to royalty recognizing just how magical it is. Speaking of the magic of yellow topaz, it helps with communication, honesty, and stimulates the solar plexus areas (mostly from the tongue to the stomach – increasing palette and aiding digestion) but also aiding in matters of the heart and skin. The magic of topaz is that of manifestation and empathy, aiding in warming the soul and alleviating moodiness. A great balancer for the Scorpios and Libras, while being favorited by Geminis. Conclusively, if one wants help, grab a topaz!